If the future of personal personal transportation is to be carried out by autonomous driving pods, then Audi has the off-road game nailed with its AI:Trail concept car. This all-electric, Level 4 autonomous vehicle is focused on all-terrain capability, offering a lounge-like atmosphere for adventurers.

Although its overall footprint is smaller than a Q3’s, the AI:Trail’s massive 33.5-inch off-road tires and almost nonexistent front and rear overhangs make it look more like a lunar rover than any SUV in Audi’s portfolio. It has 13.4 inches of ground clearance and can ford water 1.6 feet deep. It’s a regular Tesla/Wrangler mashup and is precisely what every overlanding hippie has always wanted. 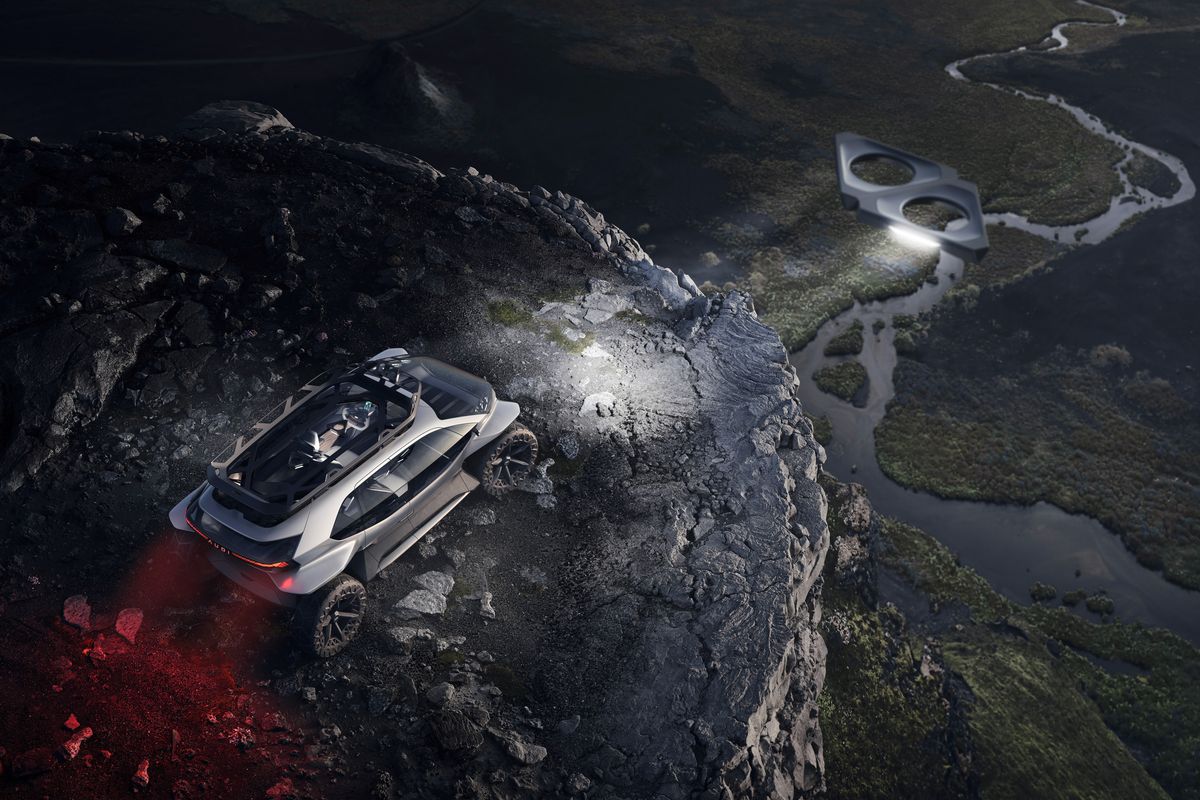 Audi missed the boat with the hardest-core off roaders by giving the AI:Trail strut suspension rather than solid axles, but, hey, it should ride well. And its sensor-controlled tire pressure regulation, which adjusts pressure based on the terrain, will find love in off-road circles.

Instead of headlights, the AI:Trail has drones that fly ahead of the vehicle to illuminate the road or lack thereof. It also comes with a brigade of fairies and guardian angels which act as a halo of safety during extreme rock bouncing should the AI:Trail happen to channel its inner Tim Cameron while you’re not behind the wheel.

Audi says that the interior is meant to evoke nature with its recycled materials and roughly grained wood. Just watch the splinters. The rear seats are removable and can be used as a sort of chair/hammock when not driving off-road is just too big a burden. There are almost no controls inside aside from a yoke-style steering wheel and a mount for a smartphone in place of a gauge cluster, and the layout is remarkably open, with huge glass areas.

Off-road, the AI:Trail isn’t fully autonomous. In fact, except for some low-speed Level 3 assistance on benign gravel roads, it’s not really autonomous at all. Which does make sense given that the entire endeavor of off-roading is experiential and because people who drive in those environments make doing so a destination because they enjoy it. Audi, however, leaves no stone unturned when it comes to ensuring the electronic overlords are always on duty. It dedicates an array of sensors, including ultrasound, radar, optical systems, and lasers—lasers, we say!—to detecting road surfaces and obstacles, guarantying that every last bit of fun is liberated from the experience.

Audi says to expect a range between 155 and 311 miles from the AI:Trail depending on the terrain. Its lithium-ion battery propels the four-motor-equipped, 429-hp off-roader to a maximum of 81 mph. Audi presents all of this—plus the notion that the AI:Trail will be available for order through an Audi on-demand vehicle pool—with a straight face. But like the fairies and guardian angels we mentioned above, we’re pretty sure they’re making it up.