Ford pulled the plug on its venerated E-series van in 2014, but the crafty artisans at Sportsmobile have found way to the keep the spirit of the Econoline alive in the form of the Classic 4×4 Overlander. 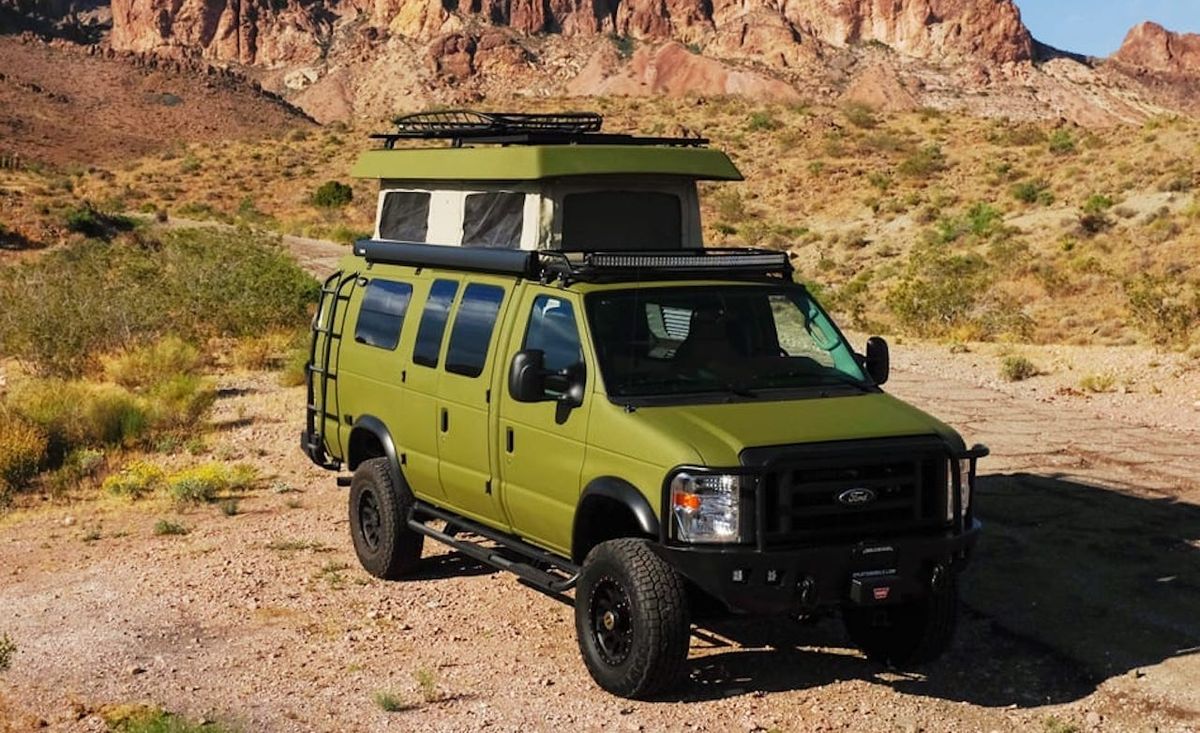 While the Transit took over for the E-series vans, Ford continued to offer the old-school E-series in chassis cab form to serve RV and commercial upfitters who appreciate the E-series’ rugged ladder frame and familiar running gear. Sportsmobile (which has been around since 1961) did a little figuring and realized it could re-create that iconic E-series bodywork while incorporating numerous improvements to meet the needs of the overlanding community. Constructed of steel reinforced fiberglass bodywork from the cab back, the Classic 4×4 features a roof-mounted pop-up, retractable “penthouse.” 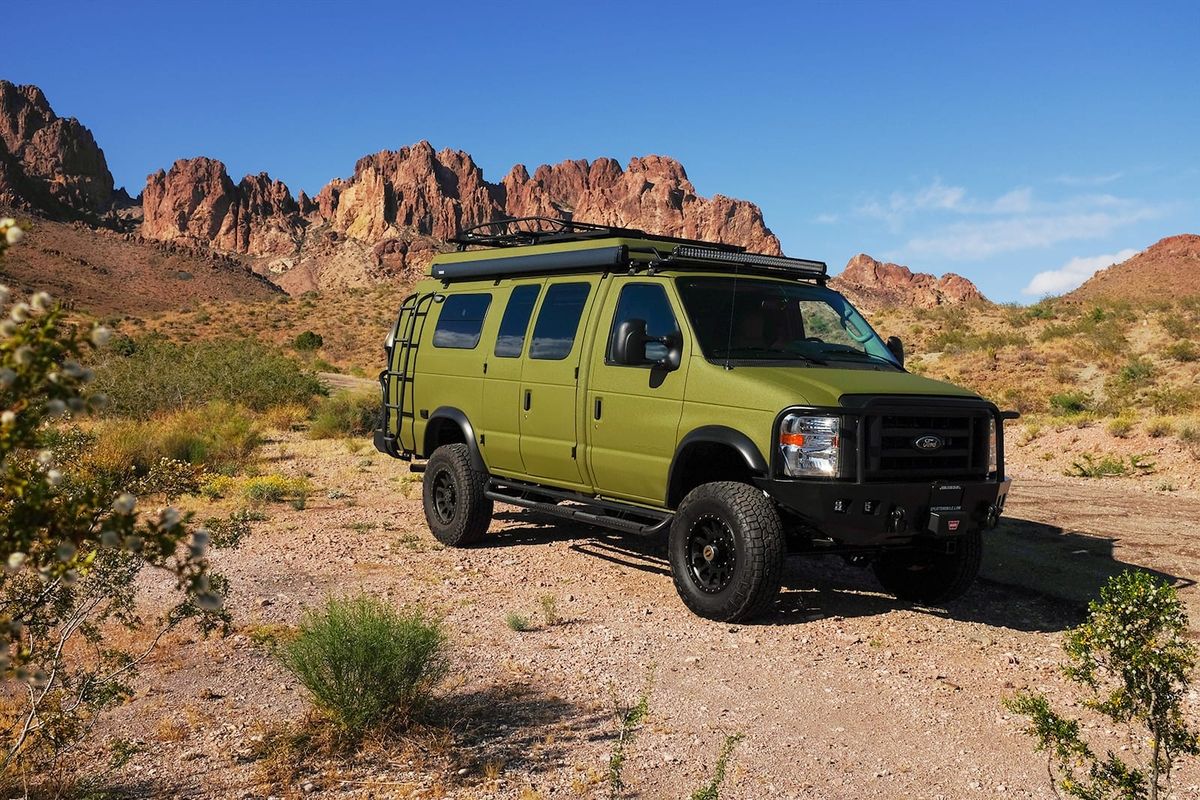 Ford’s aging 6.8-liter modular V-10 is the recommended engine choice, but the order sheet indicates the 6.2-liter V-8 is also available at a $350 discount; both use the Torqshift six-speed automatic transmission. Sportsmobile doesn’t mention it, but it’s likely that the recently announced Ford Godzilla 7.3-liter V-8 will supersede both in coming months.

From there on out, Sportsmobile outfits the Classic 4×4 with a comprehensive list of equipment from some of the most respected names in the off-road biz. An Advance Adapter Atlas II gear-driven transfer case (3.0 or 3.8:1 gear ratio) distributes the torque to a Dynatrac ProRock 60 front axle, with a Dana 60 in the rear and a 4.10:1 gear ratio. There’s a choice of an open, limited-slip, or locking differential. Spicer 1350 one-ton-rated driveline components provide durability, and the beefed-up brake rotors are sourced from Ford’s F-550 truck. A set of Fox 2.0 Performance Series dampers keep body motion under control while permitting travel, and 285/70R-17 BFGoodrich All-Terrain tires scramble for grip. Optional equipment includes front and rear ARB air-lockers ($2085 front, $2675 rear), a rear sway bar, a full-floating rear axle, and an onboard compressed-air supply for airing tires, running tools, and other dirty work. 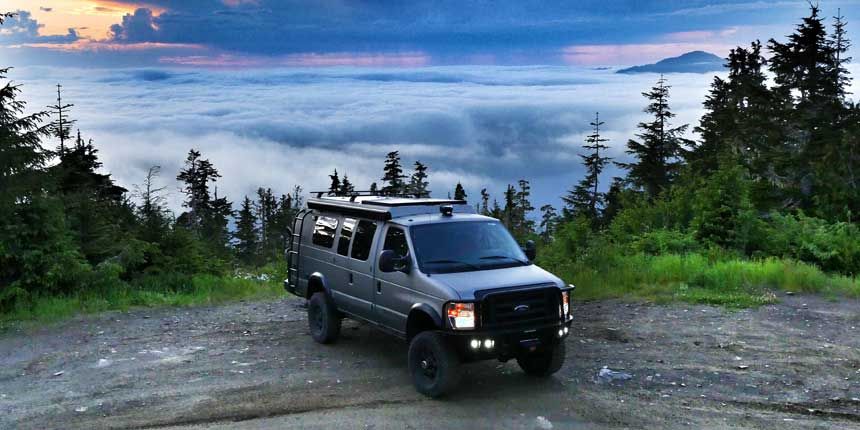 All told, this is a nearly 20-foot long, 7.8-foot-tall camper-type vehicle with 16.5 inches of ground clearance and a 44-degree approach angle that can tow 10,000 pounds, specs that put it in a very tiny subsegment of vehicles.

According to Sportsmobile’s latest figures, an E-350 cutaway with the V-10 starts at $32,850. The recommended option package (power locks and windows, a headliner, captain’s chairs, and insulation) adds $1950. Sportsmobile asks $36,195 to fit it with the Classic body with penthouse top, Line-X exterior paint, and Bushwacker flares. The baseline four-wheel-drive package, which would be a crime to omit, is $20,945, bringing the total to $91,940.

The caveat, of course, is that you now have a nearly $100,000 four-wheel-drive van without an interior. Spending that kind of money to camp out in a sleeping bag on a cold floor seems silly to us, so you’ll want to budget approximately $35,000 to $45,000 to kit out the interior, bringing the final price to around $140,000 just for starters.

The options, like the big sky you will ostensibly soon be bedding down under, are seemingly limitless. If this luxury vagabond lifestyle sounds appealing, head on over to the Sportsmobile (Since 1961!) website and get busy.